Ultimate Africa: To Walk with Lions – a photographic safari in Botswana and Zimbabwe // Day 8: Mombo Lodge 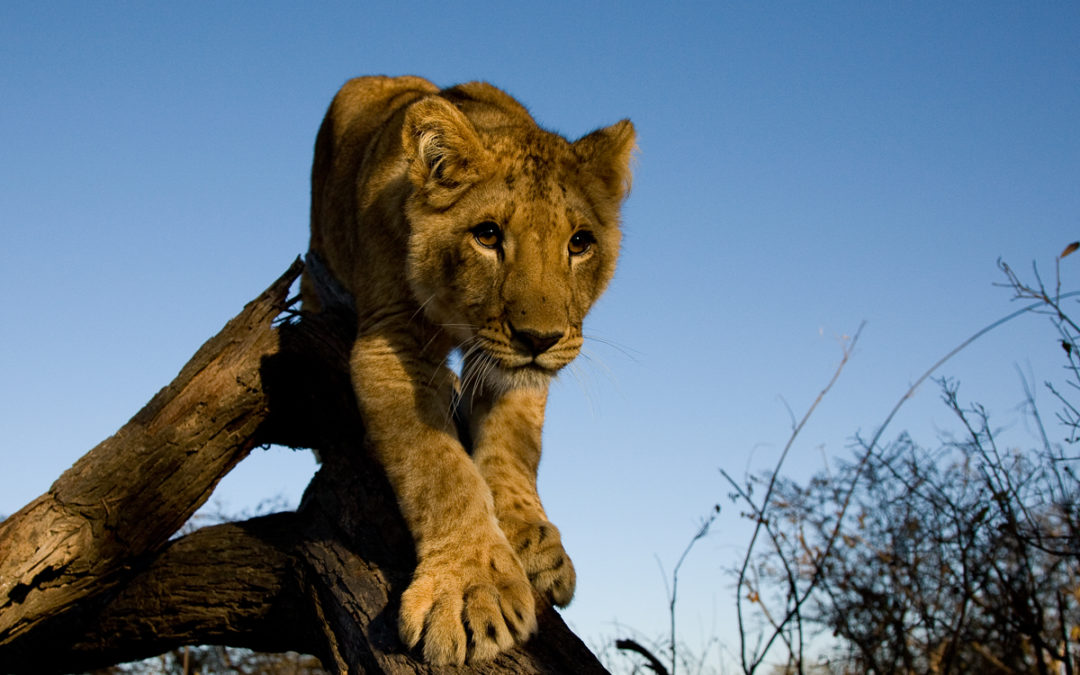 We both woke up several times during the night, and we even woke up to the whoop whoop of hyena. When our alarm went off at 5am we were both too warm and toasty in the bed to brave the cold morning air but when we realised it was 5:20 we both jumped up and were quick to get ready, adding layer upon layer to keep warm. After tea and coffee, we set off for the park. We shared a jeep with Mel and Nick again and ‘wacky races Marco’ was our driver again. One of the girls that are here volunteering also joined our jeep. We saw common dicker on the right hand side of the road on the way and by 6:30 we were inside the park.

Since we hadn’t seen much game up till now we headed 50-60 km further into the park and we didn’t stop along the way. We saw a pair of tawny eagles sat at the top of a tree, a male and a female. The male had a white belly. We saw lots of yellow hornbills, Marco said a lot of people call them flying bananas because of the shape and colour of their beaks. We saw a group of waterbuck, and not far from them saw a mother with its young. There were also side striped jackals about, we saw Roan again and we saw sable antelope – a very rare sighting! Groups of zebra and giraffe were dotted around too and this time we saw wildebeest. We saw an ostrich family with young chicks. They take about one year to grow to adult size and not many of the chicks will survive.

We also saw helmeted guineafowl, warthogs, a crocodile, a group of vervet monkeys all sat together on top of a termite mound, a black-backed jackal and wildebeest. Marco commented that a wildebeest is a “3in1” – they have horns like a buffalo, a mane and tail like a zebra, and high front legs and short back legs like a hyena.

We had lunch as soon as we arrived back at the lodge – it was already after 1pm so we were all pretty hungry by then. By 15:30 we were back out for our afternoon game drive. Even before we got into the park we saw elephants in the distance, a bachelor herd of about 6 or so. There were many giraffes around this evening and we saw both giraffes and zebras together at one of the waterholes in the park. When we arrived at the platform we could see already that there were giraffe, baboons and kudu. There were also elephants in the distance and we hoped they would come down to the water but they didn’t. They seemed quite skittish and Chris thought perhaps it was a sign of poachers. They definitely weren’t keen on visiting the waterhole whilst we were around.

It soon came time to head back to the gate and Marco, our driver, was in a hurry again trying to overtake. Several of us shouted to him this time as I had grit or something stuck in my eye which I couldn’t get out whilst we were moving so fast, plus I was juggling my sunglasses and a drink with my other hand. He eventually stopped though and I was ok. We were a bit annoyed by his eagerness to overtake as it meant getting a whole load of dust in your face from the vehicle in front, he was alright of course, because he had a windscreen to shield him!

On the way back Marco took us off to another road so we could be closer to the giraffe we’d seen earlier. We were all rolling our eyeballs because he wasn’t staying with the group – again! But it was nice to see the giraffes even though it was too dark to take any photos. We passed by another waterhole on the way out. The one where we keep seeing a hippo’s nostrils each time we’ve passed by in the last two days, only this time the top of his head and back were visible and with the setting sun and the red glow in the water it made for a nice photo. Then we had only minutes to get out of the park so we shot off to the gate and made it out just a couple of minutes after 6pm.

On the road back to the lodge we saw that one of the jeeps in front had stopped and there lay in the road was a beautiful lioness. There was another just a metre or so away in the grass. They stayed there for a while before crossing the road and then they lay together in the grasses as if having a cuddle, and then one of them rolled over, belly up with all four paws in the air. Since the sun had set we could only see them by the headlights of the jeeps so we eventually left them to it. But it was great to see lions today! Chris was saying he saw two female lions in the exact same spot on this trip last year. It might have been the same two!

Back at the lodge, Heiko and I walked over to our tree house only to hear the grunt of an elephant. We were just a few metres from our steps and we stood still, not able to see anything in the dark. We didn’t hear another noise so we went quickly to the steps, left our camera equipment inside then stepped out onto the balcony area to stare into the darkness at the waterhole opposite to see if we could see anything. We heard a lot of twigs breaking and we could hear something in the water too. It sounded like elephants, and in fact, we had been told there were elephants at the waterhole just half an hour before we had returned so it’s possible they were still around. They may have been the bachelor herd we saw on our way to the park since they were heading in this direction.

At dinner I got the giggles again and the whole table ended up laughing! I’d remembered Dennis referring to Kaleel as Collleen and it set me off, and then shortly after Nick was talking about the person named “number 16 bus stop” and said something about them being stopped by police and asked for their name – and of course that got me laughing all over again.

After dinner a few of us sat round the fire and Nathan was telling us stories of the bush. A few nights ago, Nathan and the anti poaching patrol had found 10 snared buffalo and in total recovered 23 snares. Only 5 of the snares were untouched. So it could have been much worse for the buffalo. Some of the luckier buffalos had managed to wiggle free before the snares got too tight. Two buffalo caught had snapped the wire when trying to escape, still with its foot trapped. And an angry buffalo is not something you want to come across. They will wait for humans, and then they’ll attack, quite viciously. They found one of the snared buffalo still alive and since there was no one reachable able to dart it, it had to be shot. All the other snared buffalo had been dead a few days.

There was a lady earlier today that was attacked by a buffalo. She ran away and fell down and the buffalo ripped her skirt with its horn. She was very lucky it was not worse. The buffalo might have been one of the ones that had been caught in a snare and had escaped still with the snare caught round it’s leg.

Nathan also told us that the locals here think the wildebeest is made up off all the leftover bits of other animals, a similar theory to Marco’s 3in1. He said it has horns from the buffalo, a tail and mane from the zebra, stripes from a kudu and brains from a chicken.

We were looking up at the stars tonight; there are so many here. The sky is so clear and I saw a shooting star; Heiko has still yet to see one.

Well, we’ve had to clean all our cameras and lenses again and pack our bags, tomorrow we’re on the road again, hopefully with no mishaps along the way, but TIA – this is Africa!