Conservation in the Spotlight: Care for the Wild International – Rings of Shame

This August the Olympics will again unfold with a spectacular display of colourful dance and theatre performances in an opening ceremony that glorifies the host nation. Billions around the world will tune in to watch the Games begin.

Just outside the Olympic stadium however, animals will be suffering day-in, day-out on the most horrific farms, markets and zoos imaginable. But unlike the Olympic flame, which will be snuffed out after three weeks, their pain will go on.

Hosting the world’s oldest and most prestigious sporting event is an honour, and China has done everything in its power to suppress boycotts, protests, condemnations and appeals, and keep them away from the media. But the closer we get, the more China’s check on staying out of the bad news section is slipping. Despite the country’s best efforts, the resignation of former Olympics Creative Director Steven Spielberg, in protest of Chinese support for genocide in Darfur was widely publicised. Similarly, worldwide protests in support of a free Tibet continue to hit the headlines, as have heartbreaking images of animal abuse.

Disturbing reports of stray animals being rounded up as part of Beijing’s pre-Olympic ‘clean-up’ have been difficult to confirm. Nonetheless, animal protectionists uncovered shocking conditions in cat and dog pounds on the city’s outskirts.

Improving animal welfare in China was never going to be easy. However a shift in attitudes towards animals is beginning to take root. A recent MORI poll revealed that 90% of Chinese people thought they had a ‘moral duty to minimise animal suffering’. In 2007, CWI’s Workshop for Chinese animal welfare advocates was a resounding success and offered drive and direction to over thirty emerging leaders determined to help their country’s animals.

Without the most basic animal welfare laws, however, achieving even small changes is arduous. In 2006, the National People’s Congress put forward China’s first draft national animal welfare law, but it went nowhere and little progress has been made since. While China wants the eyes of the world to focus firmly on the Olympics, our hearts are with China’s forgotten animals.

Bear bile has been used in Traditional Chinese Medicine (TCM) for 3,000 years to treat ailments ranging from fevers to heart disease. Today, thankfully there is increasing support among TCM communities for herbal alternatives. Sadly however, bear farming continues to jeopardize the survival of wild bears and puts a price on the head of every living bear.

At least 7,000 bears are held in Chinese bear bile farms. Agonisingly tiny cages, sometimes barely the size of the animals’ body, cause horrendous physical and mental suffering. Bears are often crushed to the bottom of their cages so farmers can ‘milk’ their bile through a permanent steel or rubber tube implant or tissue fistula. Bile extraction involves crude abdominal surgery and many bears die as a result of unsanitary conditions. Those that live suffer pain and deprivation for the rest of wretched lives. The torment of these animals is unimaginable and seemingly endless, for it can last as long as 25 years.

In the past, there were only a handful of large zoos in China. That was before new economic reforms began to sweep the country two decades ago. Private zoos have sprung up everywhere, locking up native and exotic wild animals for public display under the most appalling conditions. Some facilities echo the bloodlust of Roman amphitheatres but are alarmingly popular family viewing.

Here are just some examples of the grotesque abuse unleashed on animals in China’s zoos.

At Badaling zoo, just an hour’s drive from Beijing’s National Stadium, baying crowds watch live cows and goats torn apart by captive lions or tigers. Next door, visitors can refresh themselves by eating braised dog, while watching the live feeding spectacle from the comfort of their dining tables. Patrons can also push live chickens down chutes to watch them torn to pieces. For added entertainment and a fee of £2, visitors can even tie a terrified chicken to a bamboo pole and dangle it in front of the lions.

At Chonqing Safari Park’s ‘Animal Olympics’ – a sickening parody of the real Games – includes two bear cubs in boxing gloves and capes, goaded into hitting each other to delight the audience. These scenes are deeply upsetting to anyone with an ounce of compassion.

It is difficult to comprehend the acceptance of fur back in fashion, but there is little doubt that fur sells again. Much of this is due to garments with fur trim and fur that is dyed a multitude of colours to disguise it. China is the world’s largest fur producer and processor, and CWI has repeatedly highlighted the desperate plight of animals on Chinese fur farms.

Millions of Arctic and red foxes, raccoon dogs, mink and rabbits suffer on China’s fur farms before being violently killed. Cat fur too is widely available and popular, and two million dogs are skinned alive, suffocated, hanged, bludgeoned or bled to death each year for their fur.

The good news is that the hard won new EU ban on the production, import and sale of cat and dog fur will take effect on January 1st 2009. However, Chinese traders have already said they will do nothing to help enforce it, so we all need to continue to keep our eyes open.

Ninety five percent of the world’s tigers have disappeared in the past century. At least half of the last survivors, just 1,500, live in India and numbers continue to drop.

The main threat is continued demand for tiger parts from China. CWI has been instrumental in persuading Tibetans to give up using tiger skins, which cost almost £6,000, on traditional garments. But equally pricey bones, used in traditional Chinese medicines, are still in high demand.

In 1993, China banned domestic sales of tiger parts, but the Chinese Government now claims that farming tigers will help protect the species in the wild. At the 2007 CITES meeting, China pushed hard to promote tiger farming as a conservation tool. But farming tigers will never satisfy demand and only worsen the species’ plight. About 2,000 tigers are held in Chinese tiger farms, which follow the familiar pattern of misery, neglect and death. CWI fights as part of a formal global alliance of 35 organisations to shut down these horrendous facilities.

Dog meat is a delicacy in China. Eating is said to increase strength, warm the blood and enhance sexual prowess. In the run up to the Games, residents in and around Beijing were supplied with official leaflets offering guidance on conduct. Refraining from cruelty to animals in public was one of its instructions. Similarly, Beijing restaurants serving dog meat were ordered to close temporarily for fear of upsetting foreign visitors – a cynical move, which utterly fails to address the underlying problem. 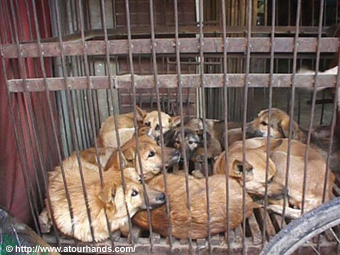 Several years ago, the favourite breed to eat was the St. Bernard, but now Alsatians are top dog on Chinese menus. Although this trade is widespread in China – even in large cities – Hong Kong and Taiwan have banned dog consumption.

Preparing dogs for the pot involves slow and brutal methods, including beating the animals to death, and boiling or hanging them up to bleed out while they are still alive. Set against China’s massive human rights abuses, the fate of these animals may seem insignificant to some. Nonetheless, each one is a life, full of consciousness and joy and their abuse casts yet another shadow over the Olympic flame.

The problems facing animals in China will last long after the Olympic Games are over. We must therefore do everything we can to ensure that China is constantly reminded that animal cruelty is unacceptable and a dark stain on the country’s reputation.

Please write to the Chinese Ambassador and ask her to help end the atrocious treatment of animals in China and to urgently develop and implement animal welfare legislation.

This article has been provided by: Care for the Wild International (http://www.careforthewild.org)