Conservation in the Spotlight: SOS Lynx 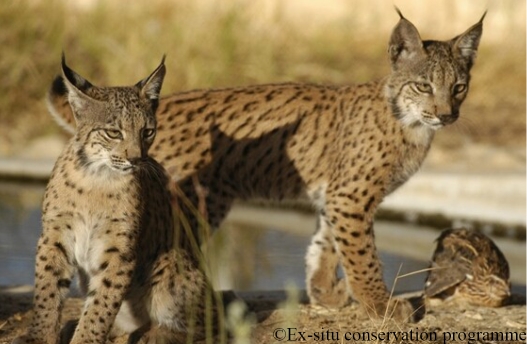 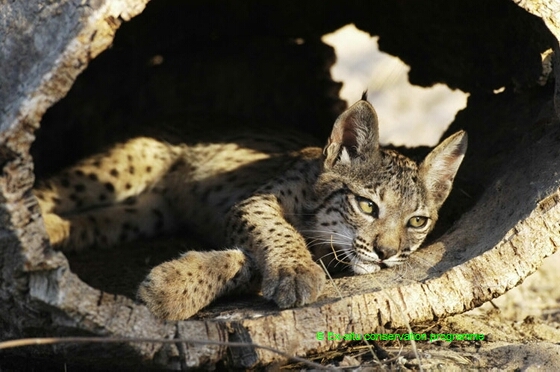 The Iberian Lynx, a medium-sized, leopard-spotted cat living exclusively in Portugal and Spain has earned the dubious honour of becoming the world’s most endangered feline. By 2004, only two breeding populations were confirmed, both in southern Spain, containing together just 120 – 155 individuals. The Iberian Lynx has drastically declined due to high non-natural mortality, habitat loss and fragmentation, and rabbit decline, caused by hunting, infrastructure developments, land-use changes and introduced rabbit diseases.

The founders of SOS Lynx ADFF, all of whom lived in the Iberian Lynx’s natural range, established this non-profit organisation in 2000 in response to this situation. SOS Lynx promotes and implements conservation measures for the Lynx and for its natural habitat. SOS Lynx is a campaign organisation works mainly at the International level. For more information and to support SOS Lynx, see: www.soslynx.org. 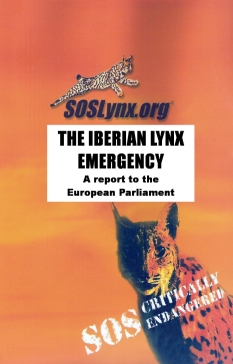 SOS Lynx has prepared and published a number of influential documents. The Iberian Lynx Emergency report was presented to the European Parliament by Dr Caroline Lucas MEP who declared that the report could be a watershed for the Iberian Lynx. If we heed it, we may still be in time to save the crown jewel of Europe’s wildlife. If we ignore it, we may have lost our last chance to save the lynx, and the reputation of conservation in Europe.

The report noted that the two confirmed surviving breeding populations – in Doñana and Andujar – are very small and isolated, and continue to be threatened by land-use changes, hunting, new infrastructure projects, road-kills and low genetic and demographic diversity.

In order to conserve the Iberian Lynx it is necessary to remove hunting and road kill pressures, protect habitat from development, restore habitat, recover rabbit populations, provide extra food for lynx, prevent new diseases being introduced into lynx populations, create a captive breeding population, and reintroduce and/or transfer animals. Any one of these actions, such as captive breeding, would not be sufficient and could only form a part of a wider solution.

The lynx conservation effort has developed late and slowly, is still new and not very extensive, and has yet to demonstrate a significant impact on the lynx. By 2004 there still had not been any lynx bred in captivity or new wild populations created, and attempts at rabbit recovery, habitat conservation and restoration, and controlling hunting and road kill pressures have not been very extensive or effective to date. Since publication of the emergency report there have been positive actions taken, but also further setbacks.

Reversing rabbit decline is one of the biggest challenges for nature conservation in Spain and Portugal, given that: rabbits have declined massively in recent decades. This decline has had devastating consequences for the native ecosystem – including many endangered predators – and that; effective recovery techniques have yet to be devised.

Wild rabbits originated in the Iberian Peninsula where they were once abundant throughout most of Spain and Portugal, at densities of up to 40 individuals per hectare. There are now as few as 5% of the number of rabbits that existed 50 years ago. Two sub-species exist. Oryctolagus cuniculus algirus is confined mainly to the south and west of the Peninsula and Oryctolagus cuniculus cuniculus to the north and east.

Rabbits are an essential keystone element of the Mediterranean ecosystem in Spain and Portugal – sometimes called the “rabbit ecosystem” – and are also important for extensive hunting by humans. At least 39 predator species prey on rabbits, including the critically endangered Iberian Lynx and Iberian Imperial Eagle, the decline of which has been partly due to rabbit decline. Rabbits are also “landscape modellers” with important impacts on plant communities, and their burrows provide habitat for many invertebrates.

Rabbit predators have not caused the decline. Rabbit decline has been caused by a number of diverse factors including: rabbit diseases (myxomatosis and rabbit haemorrhagic disease); habitat loss and fragmentation due to intensive agriculture, exotic forestry, urbanisation, land abandonment, over-grazing by large game and forest fires; rabbit control by farmers in agricultural areas and excessive hunting of rabbits by sport hunters.

Surviving rabbit populations are isolated and unstable, and continue to be threatened by resurgent disease epidemics; the possible spread of a new genetically modified (GM) virus from Australia; inappropriate and excessive human-induced mortality by hunters and farmers; and, further loss of habitat to intensive agriculture, urbanisation, forest fires and desertification – especially given the likely impacts of global warming.

Widespread and sustained rabbit recovery will require: planning and rabbit monitoring; habitat recovery and protection; a reduction in the impacts of rabbit diseases and human induced mortality; rabbit reintroductions and translocations. Many of these goals are related, and most will be need to be achieved for successful rabbit recovery.

The report identified specific initiatives that would assist these changes include: reclassifying rabbits in Spain and Portugal under IUCN criteria; a conference and web portal dedicated to rabbit conservation; a list to prioritise research areas; a new “rabbit alliance” to increase lobbying for rabbit recovery; and, an Iberian rabbit strategy and expert working group. Since publication of the report, Spain has reclassified the conservation status of rabbit species and an international conference on rabbit conservation is being planned for early 2008.

In late 2007, a third Iberian Lynx breeding population was confirmed in private hunting estates in Castilla-La Mancha in central Spain. This is an exciting development and a new sign of hope for the species.

By late 2007, there were 37 lynx in the three captive breeding programme centres: 20 in El Acebuche (Doñana), 13 in La Olivilla (Jaén) and 4 at Jerez Zoo. Of the 37 lynx, 11 were born in captivity and 26 were incorporated from the wild. The successful growth in the captive breeding population is shown below. 2007 is the first year when more lynx will be born in captivity than are incorporated from the wild. 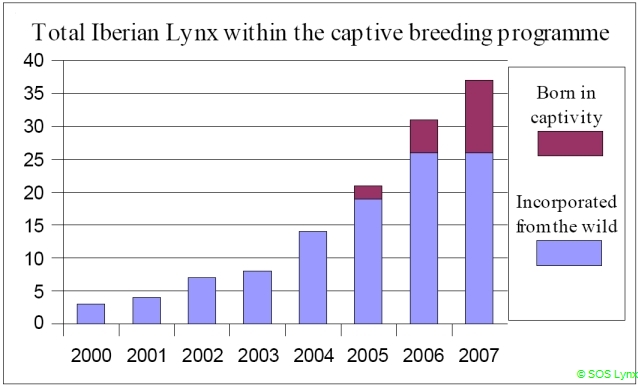 Captive breeding can only ever be a small part of successful species conservation and in situ conservation will always be more important. Similarly, reintroductions of captive-bred lynx will only be possible if suitable areas of habitat can be protected and recovered, threats from hunting activities and road traffic removed, and rabbit prey populations increased. The captive breeding programme, however, is playing an important role in increasing awareness of, and support for, Iberian Lynx conservation in general, as well as maintaining the genetic variability of the species. If the captive breeding population continues to grow as planned to over 60 by 2010, it would then be possible to use reintroductions to create new wild lynx populations in support of on-going in situ lynx conservation.

As well as the three existing lynx breeding centres in Andalucía, three more centres are under construction in Cordoba (Andalucía), Las Correderas (Extremadura) and Silves (Portugal). These new centres, along with the expansion of existing centres, will help increase the capacity of the breeding programme as well as reduce risks and increase inter-regional and international co-operation in lynx conservation. The Portuguese centre, in particular, is interesting and important as it will help maintain the “Iberian” nature of the species as well as increase political and scientific support for Iberian Lynx conservation in Portugal. The Portuguese Breeding Centre is part of a package of conservation actions that also include lynx habitat recovery, Bonelli’s Eagle recovery, rabbit recovery and other actions as “compensation measures” for the Odelouca dam and reservoir under construction for several years in the Algarve region, as stipulated by the European Union.

SOS Lynx publishes LynxBrief which is free for distribution via email. Individuals and organisations can subscribe sending a request for subscription to news@soslynx.org. Previous copies of the LynxBrief as well as the SOS Lynx reports are available on the website www.soslynx.org.

SOS Lynx is working in Portugal with estate owners and developers to develop detailed plans for species monitoring and pilot projects for habitat rehabilitation to recover land for rabbit and Iberian Lynx conservation. It continues to collaborate with schools in Portugal, providing information and material for study of the Iberian Lynx’s conservation.