Are you worried about your cousin too?

Every now and then something shows up about him in the news. Usually they either praise his intelligence or they worry about the state he’s in. We’re talking of course about our blackhaired cousin originating from the heart of Africa: the chimpanzee.

The chimpanzee is one of the five Ape species; the others are the gorilla and bonobo in Africa, and the orang-utan and gibbon in Asia. Chimpanzees live in the pristine forests of Africa, where they live together in stable communities, ranging from 15 – 150 individuals. Males stay in their natal groups for life and a community has a strict male hierarchy. Chimpanzees spend time both on the forest floor and up in the tree canopy, feeding on fruits, supplemented with leaves, flowers and seeds and insects, small animals and they even cooperate to hunt other monkeys.

Chimpanzees reproduce slowly. Female chimpanzees reach the age of reproduction at 10 – 11 years and have a birth interval of approximately 5 years, because baby chimpanzees depend on their mothers care and milk for about four years. Chimpanzees can live up to 40 years in the wild and in captivity even up to 65.

Chimpanzees are highly intelligent. They are able to modify objects like branches and sticks to create tools, for example to fish for termites or ants. They also have great memories and are able to learn and perform complex tasks. They form lifelong social bonds and alliances and know a complex culture.

Threats to the chimpanzees

Decades of research have demonstrated how close chimpanzees and other Great Apes are to us humans, both genetically and socially. Unfortunately, research has also shown that the number of chimpanzees has decreased drastically in the last century. They are already extinct in four of their 25 range countries. Of the perhaps 1 million at the turn of the 20th century, today it is estimated that there are fewer than 150,000 chimpanzees remaining in the wild. If this trend continues the populations will decline by another 80 percent in the next 30 to 40 years. There are many threats that drive these Great Apes to the brink of extinction. As a result of continuous and unsustainable logging of pristine forests and conversion of land for agriculture chimpanzees are rapidly losing their habitat. Also many of them are killed by poachers for the commercial bushmeat trade and the illegal trade in exotic pets. The ever growing human population brings them in contact with infectious and deadly diseases. And many of the countries that harbor chimpanzee populations are involved in armed conflicts that lead to environmental destruction.

We stand on the threshold of a future without Great Apes in the wild. The IUCN Red List of Threatened Species categorizes each of the species of African Great Apes – chimpanzees, gorilla’s and bonobos – as endangered. If nothing is done to turn this decline, these species could become extinct during our or our childrens livetime. 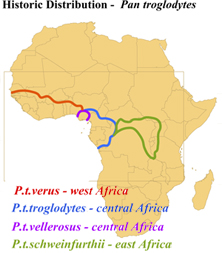 Dr. Jane Goodall was among the first to study chimpanzees in their natural habitat in Tanzania. Her work, which started in June 1960, would become the foundation of future primatological research and redefine the relationship between humans and animals. Dr. Goodall made important and surprising discoveries such as the use of primitive tools by chimpanzees, the hunting and eating of other animals, primitive warfare and lasting social bonds. In 1964 Jane Goodall established the Gombe Stream Research Center and today this project is one of the longest uninterrupted wildlife studies that exists in the world.

Today Jane Goodall’s research is continued by other researchers. Dr. Goodall travels 300 days of the year throughout the world to speak about the threats chimpanzees are facing, environmental crises in general and her reasons for hope that humankind wil solve the problems it has imposed on the earth. Her message is that if we want to secure our cousins future we have to take responsibility and secure the future for all humankind.

How the Jane Goodall Institute helps to protect chimpanzees

To help Dr. Goodall on her mission the Jane Goodall Institute (JGI) was founded in 1977 in the U.S. Today the institute has offices in more than 20 countries around the world. The main goal of the JGI is to raise awareness of the declining population of chimpanzees and the factors causing this. Also its mission is to educate people around the world about chimpanzees, their intelligence and their resemblance to humans.

JGI’s sanctuaries Ngamba Island in Uganda and the Tchimpounga Sanctuary in the Republic of Congo provide a safe haven for more than 160 orphaned chimpanzees, all victims of illegal commercial bushmeat and pet trade. At the same time these sanctuaries create jobs for local people and serve as environmental and conservation education centers. In both Uganda and Republic of Congo, as well as other African countries, JGI creates development activities in local communities.

For example in Tanzania, where Dr. Goodall began her research, JGI developed community-Centered conservation activities like TACARE (Lake Tanganyika Catchment Reforestation and Education). This activity is aimed to preserve and restore the environment while giving hope to thousands of families through initiatives that improve health care, promote economic growth and support sustainable livelihoods.

Based on the principle that knowledge leads to compassion which inspires action, JGI created the Roots&Shoots; program which engages youth of all ages through service learning. R&S; groups create hope in more than 95 countries. Roots&Shoots; has groups in rural, suburban and inner-city neighbourhoods from the U.S. to villages in Ecuador to China, and in refugee camps in Africa.

The ambitious task to save the endangered Great Apes is something no group of people or one organization, can do all by itself. It requires commitment and collaboration to face daunting challenges. It also requires a dedication work at conservation problems at their roots and working with local communities in a spirit of true partnership. Despite the challenges, we know based on conservation successes throughout the world that it is possible to bring species back from the very brink of extinction. The Jane Goodall Institute has a strong commitment to ensuring a future in which our grandchildren and greatgrandchildren can go to Africa and still find chimpanzees, gorilla’s and bonobos in the wild.

Find out what you can do to save chimpanzees from becoming extinct in the wild or how you can support the Jane Goodall Institute on our website.