The tiger is the worlds biggest cat and one of the most powerful predators on earth. Tigers capture the imagination and few would pass up the opportunity to get up close and personal with these stunningly beautiful cats. CWIs latest investigation reveals the ugly side of our fascination with tigers at one of Thailands premier tourist destinations.

The Tiger Temple in Kanchanaburi has cashed in on the allure of tigers for years. Some 300 tourists visit the facility each day. Boosted by the worldwide broadcast of two documentaries on Animal Planet, numbers reach almost 900 on busy days. But the up close and personal experience the Temple offers, turns out to be a great deal too close for comfort. Following a two year investigation, CWI published a damming report that revealed disturbing evidence of animal abuse and illegal tiger trafficking.

Approximately 15 tigers live at the Temple at any one time. Poor housing, husbandry and cruel handling are systemic throughout the facility. Far from being allowed to roam free, tigers are confined for 20 hours a day away from public view in small, barren concrete cages that fall well short of minimum requirements. Staff routinely beat adults and cubs with poles and rods. As a result, the tigers suffer a catalogue of behavioural and physical problems, including lameness, skeletal deformities and stereotypic behaviour, such as pacing and self-mutilation. These complaints are further exacerbated by malnutrition and poor veterinary care.

Interacting closely with tigers is the chief attraction that draws the crowds. Each day between 1pm and 4pm about ten tigers are chained up in the Temples Tiger Canyon, where paying visitors, including young children, can touch, sit or lie on the animals’ front or back. For a further fee staff will take a photograph. The tigers are propped up with large concrete bowls to oblige them to adopt and maintain appealing poses. Tigers are also brutally yanked into position by their tail and sometimes punched, kicked or beaten to make them compliant. Temple staff tower over the animals to control them and even quirt urine into the tigers faces. In the wild, tigers use urine as a territorial and aggressive signal. At close quarters this is extremely intimidating.

Our second concern relates to illegal breeding at the Temple, which says to breed tigers for conservation. Although it doesnt have a license, at least ten cubs were born. With no information about the tigers subspecies, most if not all offspring are likely to be hybrids. For this reason alone the Temples tigers are unsuitable for inclusion in a recognised conservation breeding programmes. Circumstances in which the release of captive-bred tigers to the wild can contribute to tiger conservation are virtually non-existent. Moreover, the release of tigers that are used to humans is dangerous and potentially fatal for the tigers, humans and livestock.

The Temple claims to have rescued its initial tigers, but a Thai wildlife trader told CWI that he sold them to the Temple. CWI also obtained evidence that the Temple is involved in the clandestine exchange of tigers with a tiger farm in Laos. It is mostly older animals that were sent to Laos in exchange for young cubs and no one knows what happens to them there. Some of the new arrivals are given the same names as tigers that had been exported to obscure the fact that tigers are being moved and to create the impression that the Temple provides life-long care. These actions contravene both local and international laws under CITES (Convention on International Trade in Endangered Species).

CWIs report also raises grave concerns about visitor safety. Cases of fatal attacks on humans by trained and apparently mild-mannered captive wild cats abound. The Temple explicitly renounces any responsibility for injuries and asks visitors to sign a disclaimer at the entrance. However, Temple staff fail to prevent contact even when the tigers are aggressive. When asked why tourists dont get bitten, the Abbot replied: They want to bite. One day they will bite. His prediction came true in September and he is currently in hospital. 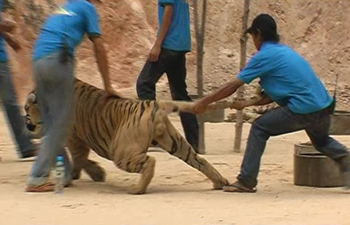 CWI has appealed to Thailands Department of National Parks to confiscate the tigers and transfer them to a sanctuary, where they can be cared for appropriately. We have identified a suitable facility in Thailand and are offering our full support.

In response to our report, Animal Planet immediately withdrew both of its programmes on the Temple from its networks. We oppose such horrific action against animals, especially any endangered species, says the Managing Director of Animal Planet Europe, Philip Luff, and wish to ensure that our viewers are not misled into believing the temple remains a haven for the tigers. CWI is also contacting travel companies who send clients to the Tiger Temple. Many have already taken the Temple off their books. With Thai authorities dragging their heels, this should go a long way towards drying up the tide of visitors to the Temple.

We do not need more captive tigers, but more tigers in the wild. Tigers can be saved most effectively by protecting their habitat and prey through uncompromising law enforcement and by eradicating demand. Tigers will not survive another decade of losses like the last. With so few of these animals left, we must act decisively to eliminate all threats to wild tigers. This includes bringing an end to tiger trade.

Write to the Thai Embassy in England, urging the Thai government to conduct a full investigation into the illegal trade and request they relocate the tigers to a suitable facility:

This article has been provided by: Care for the Wild International (http://www.careforthewild.org)