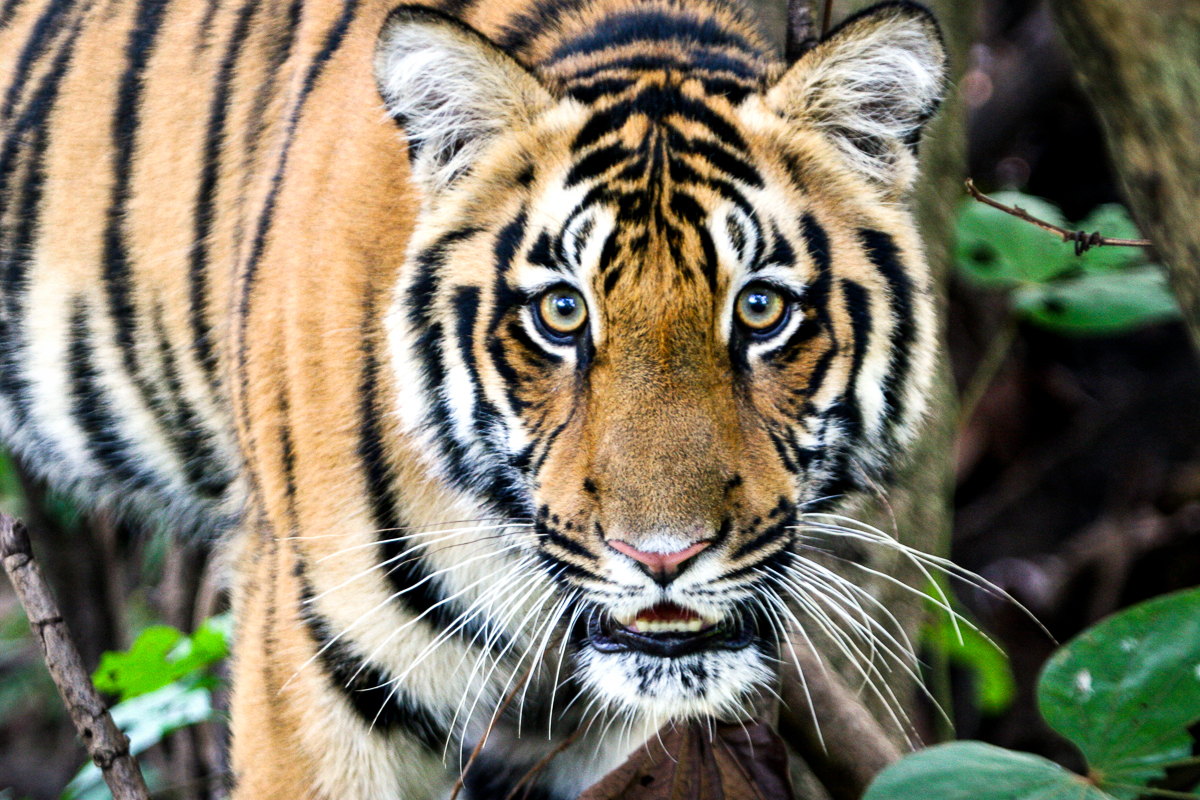 Our alarm went off at 05:00 and Heiko got up first. Only a few minutes later our phone rang, it was reception saying our driver had arrived. We weren’t expecting our driver to arrive until 05:30 so I told them we would be down then.

We found our driver snoozing behind the wheel. It was a different person to yesterday and we were expecting yesterday’s driver. We mentioned this and the new driver spoke with the porter, and then we set off to the Taj Mahal. We arrived near the main entrance where our driver told us to take a rickshaw to the entrance but this was not the plan and it took some time for him to understand we wanted to take photos from the Yamuna River side behind the Taj Mahal. And that is also what our itinerary stated – we didn’t want to pay once more to be amongst the crowds inside! He eventually drove us to the river side, stopping first at his office. He picked up another guy – it appeared he did not know the way since the other guy was directing him – I could be wrong though.

When we arrived at the river entrance yesterday’s driver also showed up and there seemed to be a mini argument between the two drivers. Since the sun was already rising, and we’d be mad if we missed it, I asked if we could go on. We took quite a number of photos at the top of the dunes and also lower down where you could see the reflection in the water.

There were quite a number of people interested in what we were doing and trying to see the photos when they displayed on the back of our cameras. Shortly before we left we got talking to a guy from Holland (near Utrecht) who was also taking photos – with a film camera. He was travelling round India for a month with his girlfriend – she had chosen to stay in bed instead of seeing the Taj Mahal at sunrise – something I half wished I could have done.

When we arrived back to meet the driver, yesterday’s driver had gone and so was the guy we picked up. This new driver was also to take us to the airport tonight. We arranged to meet him again after lunch to drive to Delhi.

Back in the room I got straight back into bed, I was really tired. It wasn’t long before Heiko lay on the bed too although I had hogged all the blankets – again! Seems I did that during the night too and managed to tuck it underneath me! Just after 09:00 we got up and showered and went down for breakfast. After a large breakfast we packed all the suitcases and watched Animal Planet (Mad Mike and Mark was on!) till it was time to check out at 12:00.

We had to complete a questionnaire for Indian Moments which asked us about our favourite experiences during our trip – obviously our time in Bandhavgarh and Kanha National Parks! For disappointing moments we put the apparent lack of communication between the Indian Moments office and representatives, hotels and drivers since we never had pick up times confirmed properly. We often had a very early morning phone call to say our driver had arrived – especially this last morning where there was much confusion – or had no phone call at all! If we had known this information earlier we could also have planned our relaxation time much better.

The questionnaire also asked how we found the accommodation (all were great except the West End Inn in Delhi), our vehicles, drivers, etc. Oh, just remembered I put our least enjoyable moments being Ranthambhore National Park were we spent three out of four jeeps safaris in this huge “big ass truck”! That was extremely uncomfortable and very disappointing!

But overall we’ve had an excellent trip, it’s been great in the National Parks, and all the accommodation and food has been excellent (plus the Imodium tablets have hardly been used)! We are even thinking of returning to Bandhavgarh NP and to Kanha NP! We’re both very glad to be going home though. Especially to be with Eddy and Freddy our cats, we’ve really missed them!

We set off from the hotel at 14:30, the drive was a mix of snoozing, reading and moving positions to straighten our legs it was quite cramped in the car for us tall people. We hit heavy traffic in Delhi, it was crazy. There appeared to be no traffic lanes and everyone was zigzagging to get in front, a mix of cars, buses, bicycles, motorbikes, rickshaws, tractors, cows, camels – in fact pretty much anything that moves, both with and without lights and many sounding the horn. It was total chaos!

We eventually reached the airport just before 21:00 (I think) which was very early for our flight at 01:30. We had our hold luggage x-rayed and sealed then wandered past the little shops – that didn’t take long since there are not many. We sat and read whilst waiting for the check in desk to open. At 22:00 we checked in and were able to book seats together and also with extra legroom. After an immigration check there were a few more shops and we stopped for a chicken and ham subway sandwich on Italian bread, it was very nice! Further wandering and we bought some crisps – one packet turned out to be so spicy that we couldn’t eat them – Heiko had a good try though! Then we headed off for the security check.

Once through security there was nothing much to do except sit and wait at the gate. I headed off for the loo but unexpectedly found it was one with a hole in the floor (I’d managed to avoid them for the entire trip so far). There was a toilet attendant and she was trying to explain to me that there was also a “European Toilet”; she was pointing madly at it – phew!

Eventually it was time to board. We had to wait quite a while since we were sat near the front and our seats were called last. We also found we had no extra legroom! We did have the three seats for just ourselves though, and so did the couple in front of us who kept their chairs fully reclined for the entire flight (except the middle one which, when I got so ticked off with the pain in my knees, I leant over and returned it to its original position – there was no one sat there)! We watched several films during the flight, and also slept a bit too. It wasn’t too comfortable though, could have done with that extra leg room! Also the reclined seats in front of us were hugely annoying!

I watched Bewitched, The Wedding Date, and A Lot Like Love (all chick flicks!). The third film, A Lot Like Love, though not fantastic was almost finished, and there must have been about 15 minutes left, when the flight attendants collected the headsets – I was ok since I was using my own but Heiko had to give his up! There must have been only five minutes left when the film was paused because there was the announcement that we had landed and thank you for flying etc etc. Then when they finally switched off the screens there must have been only two minutes left or something ridiculous like that! Ah well, I’m not buying or renting it to find out what happened though it’s pretty easy to guess the ending!

We were quickly in the airport and ready with our luggage. We decided to stop for coffee and cake before catching the train (to make us feel a little more like we were alive rather than like zombies)!

The train to Holland Spoor arrived before Den Haag Centraal and eager to get home and see the boys (our cats) we jumped on that. We then got a taxi home since it was easier than the tram with luggage (plus the trams were packed and it was raining).

We arrived home just before 08:30 (after buying some milk from the petrol station). Our cats, Eddy and Freddy, came to the door to see who it was but they didn’t come up to us for cuddles like they usually do (obviously annoyed with us for leaving them on their own)! They then hid from us and took a little while for us to coax them out. They didn’t stay mad with us for long though and they soon received lots of hugs from us. It is so good to be home, we have REALLY missed them. They followed us round wherever we went and after a while we crashed on the bed (extremely tired) but they meowed and meowed, so Heiko got up to entertain them for a short while.

It’s so nice to be in our own cozy, comfortable bed, bliss!

This site uses Akismet to reduce spam. Learn how your comment data is processed.